Enhancing biodiversity in the Brecks

We are a farmer-led group collaborating to create a landscape scale wildlife network. It’s been pointed out that we’re the largest farmland cluster in lowland UK. We have 52 members and we cover over 44,000 hectares of farmland in the Brecks, a very special area for agriculture and food production but also home to  a huge range of species, many of which are found nowhere else in the UK.

We are a group of farmers who, guided by ecologists, are learning what the precious wildlife of the Brecks needs & are adjusting our farming to create wildlife habitat networks farm-to-farm.

Our farms range from enormous estates to little smallholdings. Our farming systems vary from high yield vegetable production to extensive livestock grazing on heathland. The blowing sands of the Brecks can be agriculturally productive with irrigation, or harshly barren on unimproved heathland.

However, this landscape offers habitat for an incredible 12,845 species of wildlife. Some of these are well known to conservationists and some members of the public, such as the charismatic Stone curlew, whilst others are only familiar to a handful of experts. Of these species, 2,149 are designated as priority species (i.e. they are rare, scarce or threatened) and they need our help.These species were catalogued as part of the Breckland Biodiversity Audit, by Paul Dolman, Professor of Conservation Ecology at the University of East Anglia (UEA) and his UEA team 2008-2010. This audit – the first of its kind in the UK – was only possible thanks to the enormous wealth of biological records that have been accumulated by amateur and professional ecologists within this region.

The audit also demonstrated that 634 of these priority species are associated with dry, open habitat, and importantly 60% require heavy physical disturbance of the soil to thrive. These results have been corroborated by a six-year PhD undertaken by Rob Hawkes, who is a conservation scientist specialising in developing practical ecological solutions in farmed and semi natural environments. Rob is now leading Breckland Farmers Wildlife Network, in a DEFRA funded project and this project is overseen by Professor Dolman.

Creating a wildlife network, not a patchwork

On semi-natural grassland, crucial disturbed habitats were historically created by rabbit grazing and episodic cultivations. Nowadays, because rabbit populations have all but vanished on many of the regions grasslands, we create these habitats through ploughing, rotovating or turf stripping – a practice that can double the number of priority species.

On arable land, uncropped (and unsown) cultivated margins also provide these ideal disturbed habitats, and this management is already underway in many areas through agri-environmental schemes. In fact, if all the cultivated margins in the Brecks ran along a single road, they would link Norwich to Oxford!

We Breckland Farmers have a huge opportunity to build on the science though targeted, optimal habitat creation and linkage through these margins, creating a Wildlife Network that targets the best areas for our threatened wildlife, rather than an untargeted patchwork. 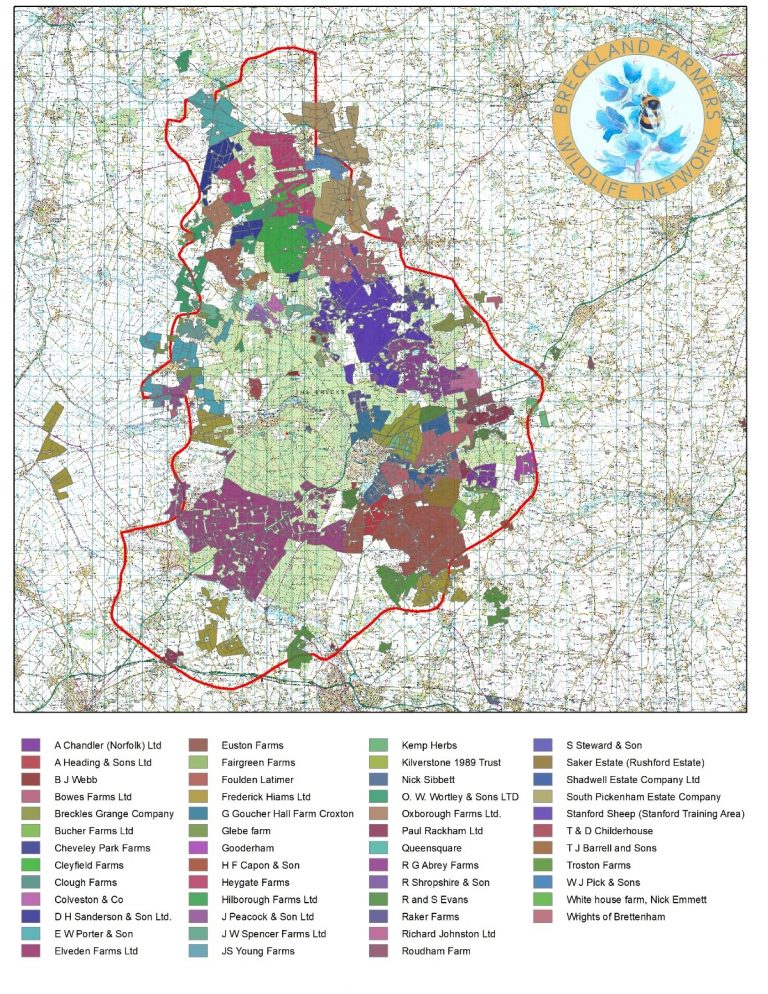 Our network of BFWN farms

Since we started, gradually more and more of the farming businesses in the Brecks have joined BFWN. The map ( see left) helps to show the area covered by our farming.

The farms may all be different, but we are united in a common interest in farming with nature. We have sub-groups for the north, west and south of the Brecks.

Each farm that joins our network receives a cultivated margin suitability ‘heat map’ for their farm. This map, which is based on an analytical tool developed by the University of East Anglia, illustrates where cultivate margin placement is likely to be most beneficial for the priority plants and invertebrates that we are trying to conserve.

In our sub-groups, we study the maps of each other’s farms so we can discuss with our advisor ecologist where agri-environment management could be delivered to best effect. We believe that this combination of evidence-based guidance (from the maps) and farm cluster dialogue (through our subgroups) will allow us to deliver effective, joined-up conservation.